Don’t be an Early Adopter 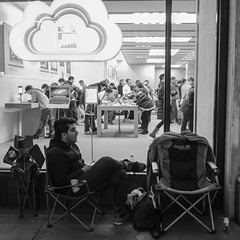 It’s considered cool to be an early adopter. One glimpse at the line of people camped outside the Apple store when they introduce a new version of the iPad or iPhone is proof that people like to be the first to get their hands on new gadgets.

However, it is certainly not smart to be an early adopter.

Let the crowd figure stuff out, then spend time asking them for their informed opinions (which they’ll be delighted to give, seeing as their aim in being an early adopter is so they get to talk about it to anyone who’ll listen!), before deciding to buy.

The same is true of online software. There are thousands of new sites out there purporting to be the next Facebook or LinkedIn that will revolutionise your life. Some of these things might turn out to do just that, but many of them will be consigned to history in a matter of months.

Many people are excited or flattered to spend time being amongst the exclusive first few geeks to check out the latest Google product or new tool. Not only is there a very high chance these things will fail to ‘stick’ and that everyone will move onto something else very soon, but at that stage, the software is still full of bugs precisely because it hasn’t had enough user feedback, so it will also be more difficult to use in the early stages.

Patience is a virtue.

You don’t need to look cool. And even if you really want to look cool, no one really cares if you do. On your deathbed, no one will ask you what you owned or what software you used and they certainly won’t ask you whether you were amongst the first to have it.