Our Productivity Ninja for the South East, Wendy Smith is back on the blog with some tips on how to increase your happiness, backed by science!

Happiness is so interesting, we all have different ideas about what it is and how to get it, however we are all obsessed about it. I’m always working on happiness and changing things so that I am happier, as I’m sure most people are, so I thought it would be interesting to find some ways to become a happier person that are actually backed up by science and try them out for myself. Here they are…..see what you think 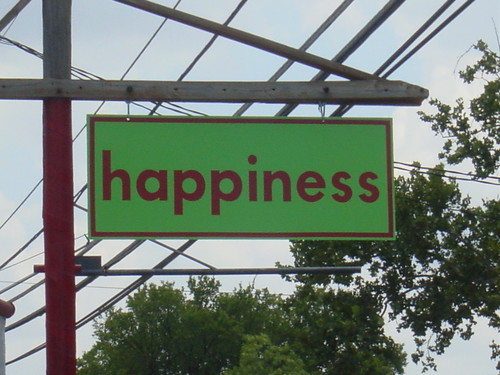 Go outside – happiness is maximized at 13.9°C

In The Happiness Advantage, Shawn Achor recommends spending time in the fresh air to improve your happiness:

Making time to go outside on a nice day also delivers a huge advantage; one study found that spending 20 minutes outside in good weather not only boosted positive mood, but broadened thinking and improved working memory…

This is pretty good news for those of us who are worried about fitting new habits into our already-busy schedules. Twenty minutes is a short enough time to spend outside that you could fit it into your commute or even your lunch break.

A UK study from the University of Sussex also found that being outdoors made people happier:

Being outdoors, near the sea, on a warm, sunny weekend afternoon is the perfect spot for most. In fact, participants were found to be substantially happier outdoors in all natural environments than they were in urban environments.

The American Meteorological Society published research in 2011 that found current temperature has a bigger effect on our happiness than variables like wind speed and humidity, or even the average temperature over the course of a day. It also found that happiness is maximized at 13.9°C, so keep an eye on the weather forecast before heading outside for your 20 minutes of fresh air.

Help others – 100 hours a year is the magical number

One of the most counterintuitive pieces of advice I found is that to make yourself feel happier, you should help others. In fact, 100 hours per year (or two hours per week) is the optimal time we should dedicate to helping others in order to enrich our lives.

If we go back to Shawn Achor’s book , he says this about helping others:

‘…when researchers interviewed more than 150 people about their recent purchases, they found that money spent on activities—such as concerts and group dinners out—brought far more pleasure than material purchases like shoes, televisions, or expensive watches. Spending money on other people, called “prosocial spending,” also boosts happiness.’

The Journal of Happiness Studies published a study that explored this very topic:

So spending money on other people makes us happier than buying stuff for ourselves. What about spending our time on other people? A study of volunteering in Germany explored how volunteers were affected when their opportunities to help others were taken away:

Shortly after the fall of the Berlin Wall but before the German reunion, the first wave of data of the GSOEP was collected in East Germany. Volunteering was still widespread. Due to the shock of the reunion, a large portion of the infrastructure of volunteering (e.g. sports clubs associated with firms) collapsed and people randomly lost their opportunities for volunteering. Based on a comparison of the change in subjective well-being of these people and of people from the control group who had no change in their volunteer status, the hypothesis is supported that volunteering is rewarding in terms of higher life satisfaction.

In his book Flourish: A Visionary New Understanding of Happiness and Well-being, University of Pennsylvania professor Martin Seligman explains that helping others can improve our own lives:

‘…we scientists have found that doing a kindness produces the single most reliable momentary increase in well-being of any exercise we have tested.’

Plan a trip – but don’t take one

As opposed to actually taking a holiday, it seems that planning a vacation or just a break from work can improve our happiness. A study published in the journal, Applied Research in Quality of Life showed that the highest spike in happiness came during the planning stage of a vacation as employees enjoyed the sense of anticipation. In the study, the effect of vacation anticipation boosted happiness for eight weeks. After the vacation, happiness quickly dropped back to baseline levels for most people. Shawn Achor has some info for us on this point, as well:

One study found that people who just thought about watching their favorite movie actually raised their endorphin levels by 27 percent. If you can’t take the time for a vacation right now, or even a night out with friends, put something on the calendar—even if it’s a month or a year down the road. Then whenever you need a boost of happiness, remind yourself about it.

Meditate – rewire your brain for happiness

Meditation is often touted as an important habit for improving focus, clarity and attention span, as well as helping to keep you calm. It turns out it’s also useful for improving your happiness:

In one study, a research team from Massachusetts General Hospital looked at the brain scans of 16 people before and after they participated in an eight-week course in mindfulness meditation. The study, published in the January issue of Psychiatry Research: Neuroimaging, concluded that after completing the course, parts of the participants’ brains associated with compassion and self-awareness grew, and parts associated with stress shrank. Meditation literally clears your mind and calms you down, it’s been often proven to be the single most effective way to live a happier live. I believe that this graphic explains it the best:

According to Shawn Achor, meditation can actually make you happier long-term:

Studies show that in the minutes right after meditating, we experience feelings of calm and contentment, as well as heightened awareness and empathy. And, research even shows that regular meditation can permanently rewire the brain to raise levels of happiness. The fact that we can actually alter our brain structure through mediation is most surprising to me and somewhat reassuring that however we feel and think today isn’t permanent.

Quick last fact: Getting older will make yourself happier

As a final point, it’s interesting to note that as we get older, particularly past middle age, we tend to grow happier naturally. There’s still some debate over why this happens, but scientists have got a few ideas:

Researchers, including the authors, have found that older people shown pictures of faces or situations tend to focus on and remember the happier ones more and the negative ones less.

Other studies have discovered that as people age, they seek out situations that will lift their moods — for instance, pruning social circles of friends or acquaintances who might bring them down. Still other work finds that older adults learn to let go of loss and disappointment over unachieved goals, and hew their goals toward greater wellbeing.

So if you thought being old would make you miserable, rest assured that it’s likely you’ll develop a more positive outlook than you probably have now.

Read Wendy’s full list of happiness boosting activities over at her blog. Follow Wendy on Twitter: @Wendy_S101. For more information about productivity workshops in London or the South East get in touch.